So I know exactly what it’s like to sleep in an abandoned building without electricity or heat … well, not really. The again, journalist brothers and sisters, do you? Well, Yuriy Matsarsky does. And in his second interview with Qwoted, the Ukrainian journalist-turned-soldier talks about his recent experience leaving the secure confines of his peacetime home to bunker up in a building so cold that sleep was an incessant battle with shivering, and a mental battle not to obsess over what might happen next. (You can hear the first interview here.)

And yet… Matsarsky described to Qwoted a curious, if small, return to normalcy in Kyiv. Vladimir Putin’s ill-advised war—rated a stunning failure thus far by the world’s military experts—has left the Russian army stranded some 20 miles outside the capital, unable to move. Or muster the supplies to move. Or the morale. It’s a bit like watching little leaguers take on the Atlanta Braves, though there’s little making light of the massacres—war crimes in all but official designation—that the Russians have inflicted on places such as the coastal city of Mariupol.

Matsarsky is a battle-hardened journalist, having covered conflicts in the Middle East. But even he can’t believe what the Russians have done to innocent women and children in that coastal city of 400,000. He also takes issue with Western media accounts that describe some captured Russian soldiers confessing that they were remorseful and reluctant to engage in Putin’s war.

Rather, he insists—and this based on intercepted transmissions—that the Russian soldiers have gleefully taken to missile firing, killing, pillaging, raping, whatever they can get away with. Not a single peacenik in the bunch. It’s only in the cowardice of capture, he says, that they regret their own roles in the slaughter. (If they were truly against this, why not just abandon their tanks and convoys en masse?)

Let’s put it this way: Among all journalists on the ground there, whose word would you take seriously?

A son of freedom, a daughter in exile

When I asked him about whether some Russians soldiers might truly feel conflicted about their role in the war, Matsarsky replied: “That’s bullshit. Bullshit.”

Meanwhile, the dogged journalist in Matsarsky remains very much alive, thank you. In Kyiv, he has aided reporters from the BBC and news outlets worldwide get to places of safety where locals can tell their stories with depth and power. In this way, Yuriy is a no-nonsense, self-styled go-between: one who speaks the international languages of journalism and patriotism.

The conflict has hit Matsarsky hard in ways he can’t even begin to describe. He “celebrated,” if you call at that, his daughter’s 17th birthday knowing she has fled for her safety to parts unknown. It’s a similar situation for other family members, who as refugees aren’t in the same place to care for her.

The Facebook message Yuriy sent to her is equal parts heartbreaking and defiant:

“Photo was sent by friends she is currently [with], giving me the opportunity to serve peacefully in TRO. Hold on baby, everything will be fine. Next birthdays we will celebrate together. Together to the victory.”

It’s just as fitting for a beloved nation as a beloved daughter.

Help Yuriy as he fights for Ukraine and a free press

Here I pause to mention that in support of Yuriy’s family, my media colleague Stevie Manns has started a GoFundMe page to support Yuriy’s family. Anything, anything you are doing right now to support everyday people in Ukraine I can tell you, per Yuriy’s repetition of such, is thankfully received beyond measure. Their gratitude is immense.

But Stevie—who has mounted a series of excellent podcasts with Yuriy called “Fighting for Ukraine”—has gone a step further to get involved. Their GoFundMe campaign,  “Help Yuriy’s Family,” recently passed the $2300 mark—and will soon steam past that as soon as I grab my wallet and stop bitching about how I’ll miss my morning iced mocha for a few days. 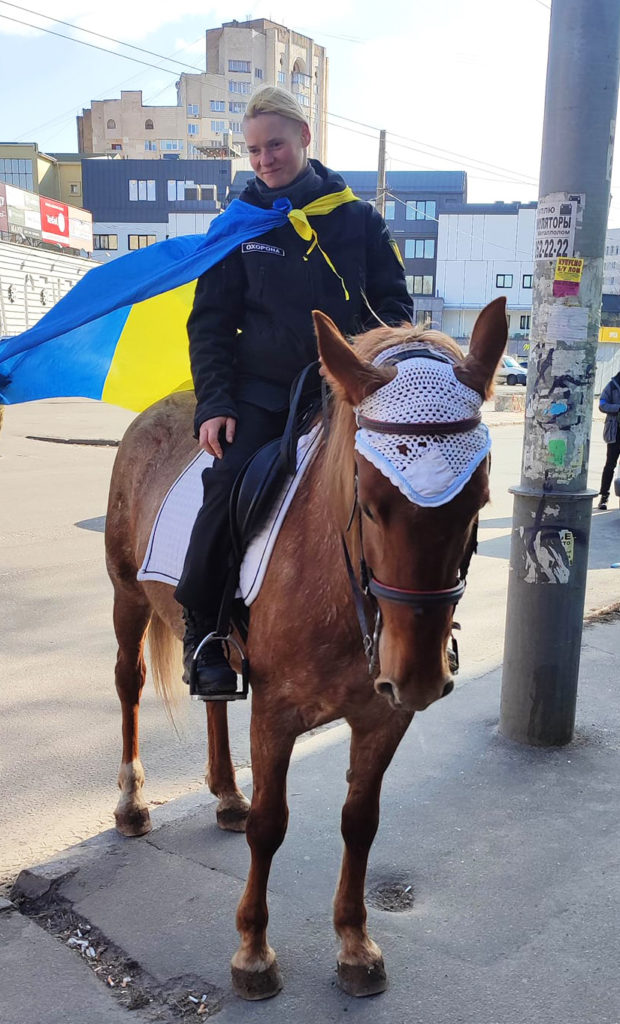 Speaking of caffeinated brews, coffee shops in Kyiv have reopened—if you can believe it—over the last week, Yuriy tells me. He even suggested that I’d probably enjoy a brew there, even with the Russians trying to breathe down residents’ necks. Then again, stuck as they are outside of Kyiv, Putin’s pawns are probably craving a cup of hot java right now.

There is also, in Matsarsky, a cheeky sense of battlefield humor—which to me only reinforces that we’re rooting for the good guys. He put on a wild-eyed mug for a Facebook profile photo some days ago, and recently posted a picture of a woman on horseback, wearing a Ukrainian flag like a cape. His caption declares: “The cavalry has pulled up.” (In case you’d miss it, the horse is wearing a cute lace cap on its brow.)

Though I understand the implications of declaring a “no-fly zone” over Ukraine—a move that might move Russia’s insane clown to call for the nuclear launch code—I feel a sense of frustration that we in the U.S. are not doing more. If you’ve been watching closely, the ruble has actually gained some value in the last week or so.

Oligarchs are moving fast to hide their valuables, much faster than world governments have tried to seize them. A majority of Russians defend the war and believe the lies circulated by state media, as independent journalists flee the country or else duct tape their mouths shut. India, which succeeded in watering down climate change targets at COP26 due to its insatiable appetite for coal, is now buying as much Russian oil as it can at bargain prices.

But if a no-fly zone just isn’t possible right now, whatever the reasons, there is something no world leader can put a stop to: our citizen efforts here in North America, Europe and beyond. To send humanitarian aid, shelter refugees, contribute to any of the legitimate GoFundMe pages for Ukrainian causes: all of this can eradicate that powerless feeling and reinforce how we can help in ways that will make a human difference. I saw it on a Ben & Jerry’s poster once, this quote by Ronald J. Sider: “No one can do everything, but everyone can do something.”

Or, as Gil Scott-Heron said, “The first revolution begins when you change your mind.”

Lou Carlozo is Qwoted’s Editor in Chief. All views expressed are his own but yours to share if you believe in a free Ukraine. Email lou@qwoted.com or connect on LinkedIn. Please consider a gift to Stevie Manns’ GoFundMe page to support Yuriy Matsarsky’s family